Today I will take you on a walk again in Istanbul, we will go and visit the Blue Mosque that is situated in the center of the city near Hagia Sophia. This mosque was built between 1609 -1616 during the rule of Ahmet I. It was for the first time when  a sultan built a mosque from the treasury house and not from war spoils. This brought the fury of Ulama the Muslims  Jurists. But even so the mosque is beautiful and stood up in the storm of time for more than 400 years and made the sultan name still praised even today as the mosque has his name. 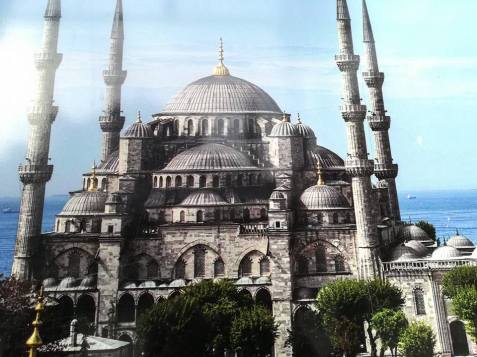 It is one of the few mosques that  have six minarets. There is a local story about this minarets, it seems that the sultan wanted to build the minarets  towers with gold, which is called in Turkish altin but the  architect was against  gold on minarets as they  wouldn’t be fit  for a  minaret so he did put instead of gold six minarets, using a trick as in Turkish  the word six ( alti) sounds similar to the word gold.

The sultan wasn’t pleased about the architect explanation but he believed him still. One of the sultan problems was that only Mecca could have 6 minarets. The sultan solved the issue by adding to Mecca another minaret.

To pass inside of Mosque you have first to go inside of the yard,  at the gate there is a chain as you can see, on this entrance the sultan could came in on horse  but bowing his  head showing piousness.

In the yard you can admire a nice fountain that was used by the sultan so he can purify himself.

We can also go inside but we will have to take the shoes off, we will skip the water ritual.after we put the shoes out we can pass inside where we can see more than 20000 hand-made ceramic tiles from Iznik in more than fifty tulip styles. Some of the tiles are decorated in a traditional way while the others are in a more flamboyant style, representing flowers, fruits cypresses. 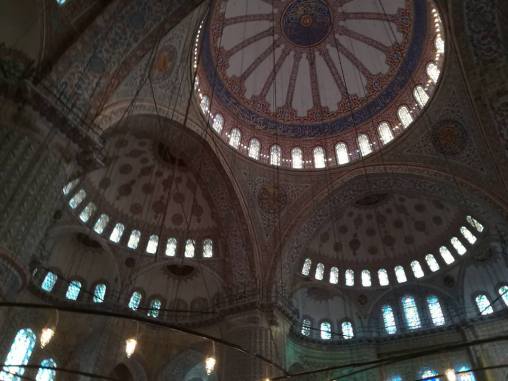 It is said that the prices for tiles was fixed upon a sultan decree.  The upper levels are dominated by blue  we can see more than 200 glass stained windows with intricate design that admits natural light , you can see how beautiful they are. If you look around on the walls  you will see the decorations  with painted words from Quran.

Many of them were made  by Seyyid Kasim Gubari, who was regarded as  one of the best calligrapher of his time , we can just admire how beautiful they are.  We can also admire the chandeliers that they say have Ostrich eggs, to avoid cobwebs and repelling spiders.

We can also admire the carpets that are nice and soft.

The carpets are replaced at times by the faithfuls .

So I hope you enjoyed visiting a nice place full of history.