Today, I will tell you a story about Romanian tradition. On the night of 23-24 June is celebrated the holiday called traditional Saziene or Dragaica. Sanziene are beautiful good fairies that like to help people. Dragaica is the fairy that leads them. Sanzienele are considered the priestesses of Sun. In the night between 23-24 June, they dance and sing in the forest, blessing nature and the animals. On this night, plants have the most significant effect as cure medicine, so people will gather some plants in the morning of this day.
On this night, men shouldn’t go walking in the forest because even if Sanzienele are good faeries, they don t like to be seen dancing, so they will punish any man that dares to see them dancing.. 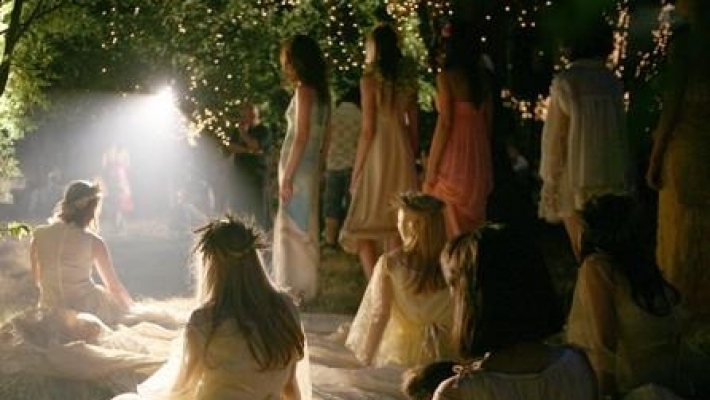 In the morning, women should go and gather yellow flowers that are called Sanziene. Young women should do a crown of these beautiful flowers and then throw it on the roof of their house so in this way they will know if next year they will get married or not if the crown stays on the top than until next summer they will get married. If the flower crown goes down, they will count each throw they need until the crown stays on the roof. Each try means a new year to wait. Young women can also put some flowers under their pillow to dream of their chosen one. Older women can use the flowers to make a belt from it and put it around their back, so they won’t get back pains all the year. Also, in this day-old, women get the tiny water drops that are in the morning on flowers to use on different spells, mostly love spells. But to do that, the old lady has to gather all the drops in a new pot and be silent until she gets home and not meet anyone while she gets home. On the morning of this holiday, women can be bathing in the river and lakes to be healthy and beautiful all year.
On this night in some villages, people make big fires on the hills, young men that are more courageous will jump or play with fire, they will purify like this and also impress young women. In other villages, young women go out in the forest gathering flowers and dancing. They will be led by a young woman called Dragaica.
It is said that on the night of Sanziene, the borders between the death world and this world are open. People are giving food for the souls of the dead ones on this day and putting flowers at the tombs of the loved ones that passed away.
Now, in this night people can listen to what animals say, people if they pay attention they can find where are old forgotten treasures buried. Finding the white flower of Feriga and having the courage to defy the spirits that guard the treasure can help you find a lost treasure.

In the night between 23-24 June, you can get verbina that would help you not have all year headaches or be tired. Verbina was used in ancient times in temples where the Romans decked the walls. To get rid of your headaches and tiredness, you have to do it respecting some ritual. You should get it out of the earth just with a silver knife and in that place to pour some honey and wax. After you get the plant, you should gently lay it down and watch it until sunrise. That was for headaches, for tiredness you should place the plant in your shoes and by magic, you will feel fresh.

On this night you should be careful where you go, forests might be dangerous places, but also if you would like to go for a hunting treasure, listen to all animals around you. Your cat or your dog might know something so pay attention. If you don’t hear them try with the birds. If it is not working with them, you should try to find that white feriga flower that might help. I hope you enjoyed my story.

Pictures in this post are gathered from all around!