Today, I will take you in a new trip, we will go to Germany, near Munich.  At 25 km north- west of Munich there lays an old Cisternian abbey. There in the abbey we can go visit  probably the wealthiest skeletons that we can see hmm laying asleep. They are wealthy as they are full of beautiful stones and gold but they are also very old.

One of them lived  at the Roman court, he was young, age 12 and all was probably good and great for him until he was caught praying to Christ. He was brought to emperor Traian, than he was  imprisoned because he didn’t worship anymore the Romans Gods. His name was Hyacinth , before he was thrown in jail he was beaten. He didn’t change his mind and he didn’t  worship the Romans Gods. He died later refusing to eat.

The other one that lays in the abbey, dressed the same is Clemens, he also like Hyacinth died because he worshiped the wrong God. He was beheaded.  Both became saints and both lived in the same time at the beginning of Christianity. 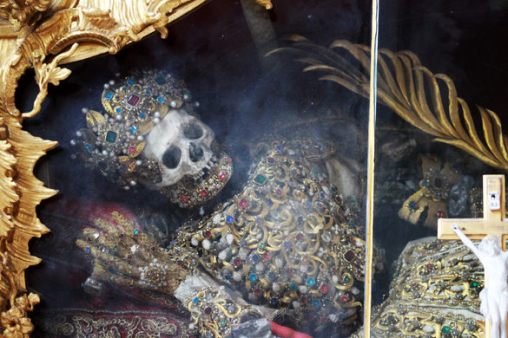 Talking about death, the abbey was built as a pay for a deadly sin. Louis II , duke of Bavaria, in 1256 killed his wife, Marie of Brabant.  He thought that she cheated on him, which eventually wasn’t true, but he got away with his crime easy as he had to build this abbey as penance given by Pope Alexander IV.

The Duke was buried here when he died.Later his  son Louis IV  gave the abbey enough resources and also his heart.  He died after a bear hunt and it seems that his heart was buried here.

Much later the abbey served as a hospital, boarding school, police related institutions and now again as an abbey, cultural center  that can be visited. 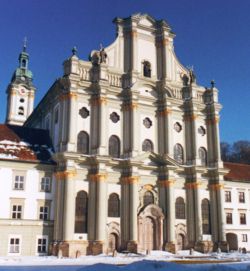 I hope you enjoyed!

Pictures are not mine, I hope I can soon visit it.