Today, I could take you on a trip, but outside is snowing. I can’t say that I don’t like the snow, but it is a bit too much for my taste now. I will tell you a story not about Romanian tradition as I could as today is the Epiphany. I will tell you about a treasure.
In 1931 at Agighiol, a village near Tulcea, some treasure hunters devastated an archeological site. The authorities quickly tried to catch the treasure hunters but failed to catch them. Shortly after this, the authorities started the site’s research for relics. The investigations led to new findings; they found a big funeral complex with several chambers. The big tomb had two big rooms, a lobby some outbuildings. In one of the chambers were found horses skeletons. The sacrifice of horses was a common practice in the tombs of Thracian origin and the Scythian origin.
The site is better known for the big treasure found in the two main rooms. In one of the rooms were found the remains of a man, who most probably was a prince considering the treasure found in his tomb and an inscription found in the grave. The second tomb was found a skeleton of a woman buried with jewelry made of gold or other precious metals.
The treasure most probably dates since the IV century BC. Among the things found in the tomb, we also found a name inscribed on a silver vessel. The name most probably is the name of the deceased. Kotios Egbeo is the name found inscribed, a common name of the Thracian rulers.
The entire treasure that was found was displayed in Bucharest. Unfortunately, a big part of the treasure was lost during the war, in 1945 when the building was bombarded. The rest of the treasure that didn’t get lost is displayed in the History Museum in Bucharest.
The treasure that remains is composed of a gold crest that is beautifully crafted. On the front side of the crest are crafted two big eyes. The eyes are supposed to protect the bearer of danger. On the sides are crafted two warriors that carry two spears. Two shields for legs, five vessels, harness apply, fashion jewelry. So If you want to see the treasure, you can visit the History Museum. You can also see more beautiful treasures there, in the treasure room. Below you can see the website for more info and some treasure pictures. I hope you enjoyed it. 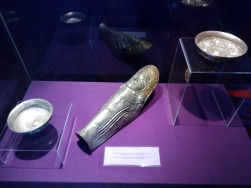 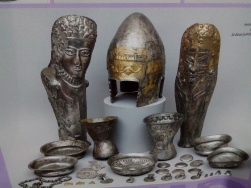