Today I will take you in a new trip so, grab my hand and let’s have a walk. We will walk in one of my favorite places, a beautiful park in Bucharest, my home city. It is one of my favorite parks because it is old, beautiful and in the middle of the city. It is also nice for a walk in the summer, in a cloudy day with some thunders and lightning because things seem more mysterious.

I say mysterious as this place has a long history. It is actually the first park we had in Bucharest. Grab my hand and let’s walk through the history of this place. Long ago on this land there used to be a lake called “The Lake of Dura Neguțătorul”, probably a comerciant during Matei Basarab reign ( around 17 century ), but at that time it wasn’t a park, it was just a land full of water. The history of the park will begin in 1779 when Alexandru Ipsilanti, the ruler at that time, wishing to build a fountain, ordered it’s construction on the place where the park is now standing. He will put in charge Dumitru Siulgi-basa – a Romanian with a Turkish name, a man whom he set in charge to oversee the maintenance of the water pumps. This guy will have his house built in the same area of the fountain. The fountain was a source of drinking water to people, so many people probably came and get water from here. Soon there will be a new job called “sacagiu”, they were the people who brought water for those that wanted. It seems this fountain had some inconveniences because the excess of water will become a swamp later and a source of infection as the water was just sitting there. After the fountain was built, the place which was known as “The Lake of Dura Neguțătorul” will slowly get a new name, Cișmigiu. The name came from the job Dumitru had and because he had his house next to the fountain. The area where the park is now located used to get full of water after heavy rains, so full that all the area will be flooded all the way to what is now Cercul Militar.

Cișmigiu started to be more like a park much later, first step was taken by Pavel Kiseleff, who demanded the drying up of the pond and the land to be made a public garden. This starts happening much later in the time of Gheorghe Bibescu when the place will be arranged as a public garden. The landscaper Wilhem Mayer was brought to arrange the garden. He used to be the director of Imperials Gardens of Vienna. He will have some help from the gardener Franz Harer.

More will be done in Barbu Știrbei time, he will decide to dig up a pond to connect it with the river Dâmbovița with a chanel. Later, in 1851, the artesian fountain that is in the middle of the lake will be inaugurated. In 1852 some benches will appear in the park and also the garden will have a groove fence. Two years later Cișmigiu will be inaugurated as a public garden, a place where everyone could walk, where the beauty, rich and poor will blend in together.

In 1856 a part of the lake will be dried because of the shoemakers in the area who used to throw scraps in the lake.

Now after I told you a little of the history of the park let me tell you about some more interesting things.  It seems that under the park there is an old tunnel that was used in troubled times. The entrance is at the old fortress, which is not actually a fortress, it used to be an old church in the time of Logofăt Văcărescu around 1756. From the old church, beside the walls you can find an Cyrillic inscription that is currently in the church “Schitu Măgureanu”, near the park.

The tunnels used to be from Cișmigiu to Calea Victoriei, to the what is now Cercul Militar and what used to be the Sărindar Church, going to the National Bank and than arriving to the Old Court. One of the tunnels was going to the Văcărești Monastery. Is is a big tunnel, so big that you could go with a carriage inside. We can try to find the entry into the tunnels and visit half of the city by the tunnels. I hope we would manage not to get lost in them. But before we enjoy the tunnels we can enjoy a walk in what used to be the old church, admiring the old walls that probably have seen many things from lovers that were looking for a quiet place to more violent times when maybe some where hiding into the walls of the church running for their lives.

Now, let’s go to the oldest tree in the park. It is a beautiful tree. The pigeons like it and the rumors have it that under it there might be a treasure buried. Fortunately the tree is protected by law so nobody would dig for it.

Now we will go visit that part where we can admire some birds. They are nice and they like the little lake they have on here. Next stop it will be the spring of Mihai Eminescu, it seems the poet used to come here and have some fresh water, as he used to work and live near the park.

We can have a walk on the writers round and have a quiet talk with them, maybe they have some interesting things to say as they’ve seen many things since 1943 when they stay as silence witness of times. Than we will walk to the watchtower where sometimes we can enjoy some music or just the sound of the pigeons. We can admire the old platan trees. At the exit of the park we can have a look at the oldest newspaper shop from Bucharest. 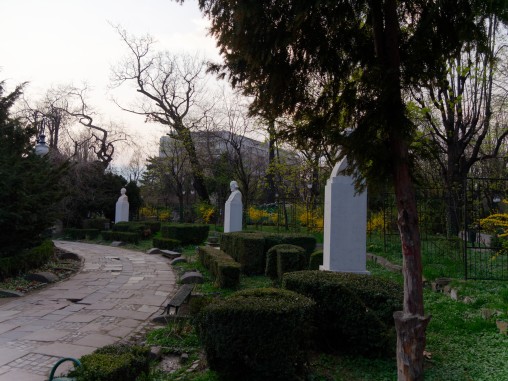 It stood for many years in the park sharing the news of the new times and old times.

I hope you enjoyed our walk in the park and that you will come soon in another trip with me.